We are proud to have a peer-reviewed research and development article titled Proof: How Small Drones Can Find Buried Landmines in the Desert Using Airborne IR Thermography published in the December issue of the Journal of Conventional Weapons Destruction (JCWD).

More than 100 million landmines and other items of explosive ordnace (EO) are still scattered around the world today, posing unspeakable threats to human and animal life. Such a devastating legacy of war maims and kills, stifles the capacity to produce food and blocks access to infrastructure and services including; schools, water, electricity and transport for decades after conflict has ceased. As a result, inequities are fostered and local communities fearing for their physical, economic and psycho-social well-being are further isolated.

A focus of the article was in presenting real world proof regarding how small drones could locate buried landmines in the Sahara Desert, Northern Chad using IR thermography. A breakthrough after more than 30 years of speculation regarding the potential for IR thermography as a technique for locating buried landmines in arid environments. The concept is not new, however – there has been a lack of real-world proof to back up claims, which was addressed in a second, editorial piece titled Time to Stem Lightweight Approaches and Focus on Real Minefield Data?

Sharing learnings is important in terms of pathways to impact across the humanitarian mine action (HMA) sector, leveraging funding from the donor, the Belgian Department of Foreign Affairs beyond a single project. Ideally acting as a catalyst that prompts future breakthroughs from many different HMA operators in arid (and perhaps semi-arid) environments to help beneficiaries around the world.

This was a milestone article, creating a new state-of-the-art in knowledge – in practical, field-ready, real-world ways. Ideally kickstarting activities that save lives and limbs, accelerating the land release process, and enabling better productivity at a scale of millions of dollars a year.

The choice of journal was important, as the JCWD spans beyond academia, with extensive reach across the HMA sector – which will resonate at all levels in HMA, from technical specialists in the field through to head office managers, and donors. Peer reviewers for journal were also HMA subject matter specialists, critiquing in practical, relevant ways.

One of the fulfulling parts of the Odyssey 2025 Project was that results were not achieved alone. John Fardoulis/Mobility Robotics took the HMA project partner, Humanity & Inclusion (HI) along a journey that achieved ground-breaking results. The High Commission for Demining (HCND) in Chad and national staff were also important partners along the journey, with a drone programme implemented in a country without any regulations for using such equipment.

The following 10 minute presentation provides an overview, including examples of methodology developed by Mobility Robotics together with HI.

The value of the work has been independently reviewed, with one of the more prestigious acknowledgements being from the European Commission awarding drone components of the Odyssey 2025 Project a €1,000,000 EIC Horizon (Horizon 2020) Prize for Affordable High-Tech for Humanitarian Aid.

The Odyssey 2025 Project in Chad ended in March 2020, meaning that it is time to create new projects, in new countries. Trailblazing and creating operational capacity in post-conflict zones – making a difference to the world in challenging, often hazardous environments.

We were delighted to present at the World of Drones and Robotics Congress #WoDRC in Brisbane, Australia today – outlining how small drones can make a difference in humanitarian mine action (HMA).

A copy of the presentation can be seen from the link below.

The first part explains why HMA is necessary in over 60 countries and territories around the world, followed by examples and lessons from the field regarding how small drones can help in HMA. Basically a short case study, with real-world examples from work that took place under challenging: harsh, remote and hazardous conditions in the Sahara Desert in Chad from January 2019 until March 2020.

Institutional support, embedded field trials, capacity building – including the development and delivery of two diploma levels of training for national indingenous staff, equipment selection and more advanced remote-sensing research was provided by Mobility Robotics during the Odyssey2025 Project in Chad together with Humanity and Inclusion (www.hi.org). 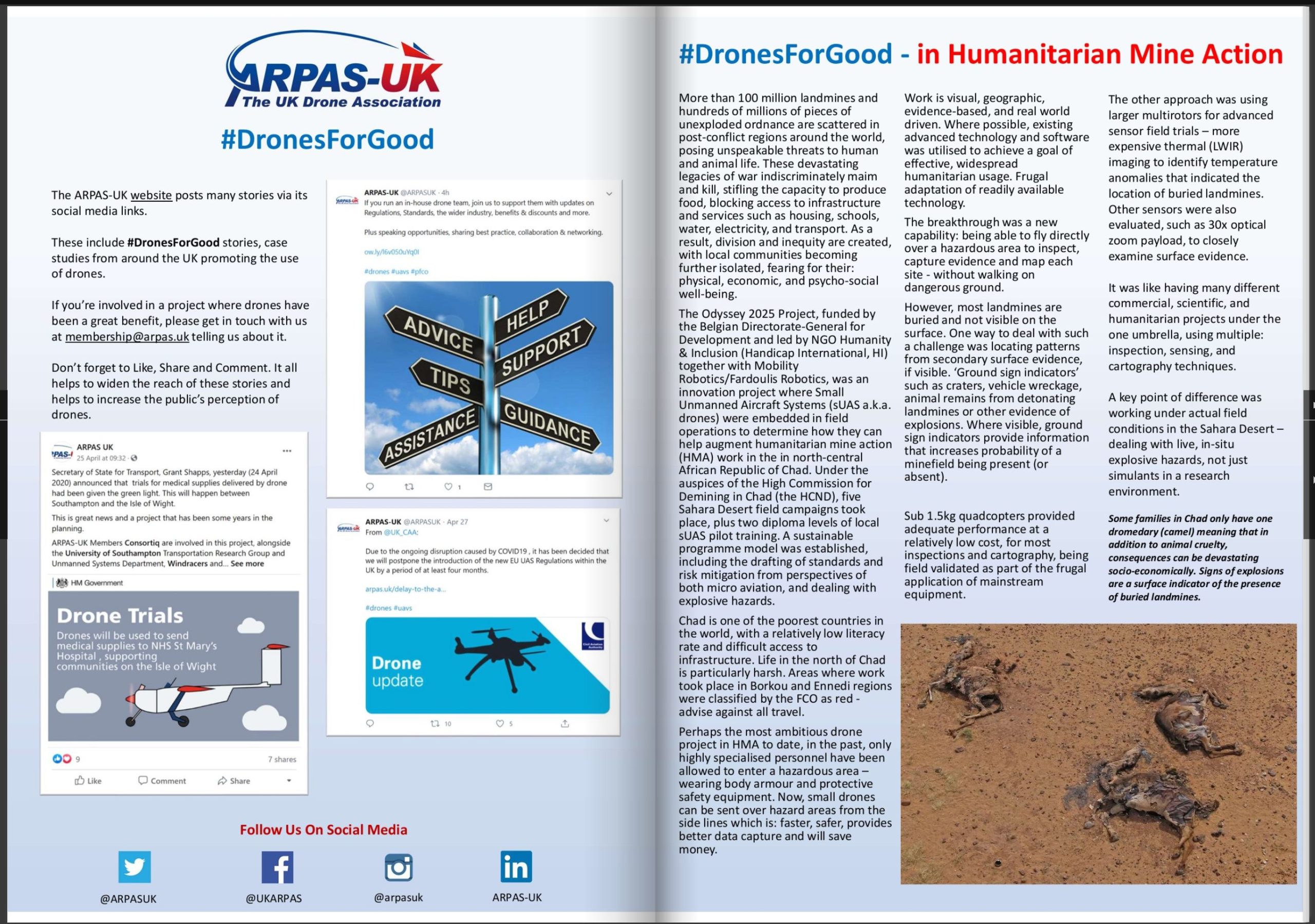 We’re really proud to have an article appear in the ARPAS-UK online magazine this month about the humanitarian mine action Odyssey 2025 drone project in Chad.

A link to the article is here.

ARPAS_UK is the Association of Remotely Piloted Aircraft Systems, a peak industry association which supports and acts on behalf of the professional remotely piloted aircraft (RPAS) community in the United Kingdom.

The perfect project partner – with extensive expertise in the design and implementation of unmanned aerial system (UAS, aka. drone or RPAS) programmes, usually in challenging environments. Previous work has taken place in countries such as: Australia, Cambodia, Chad, Japan, Germany, France, the United Kingdom, Greece and Kosovo.